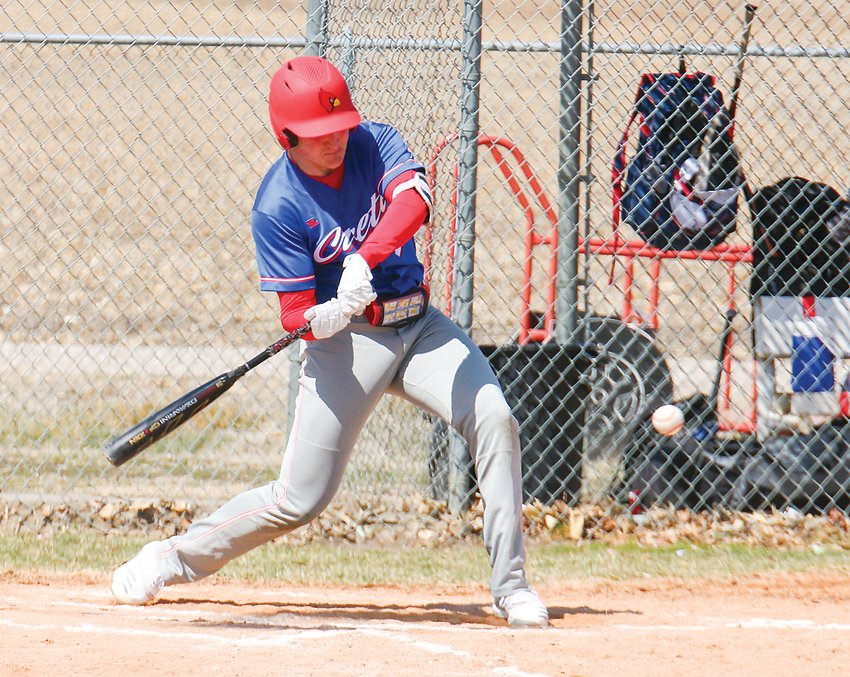 The Crete/Milford baseball team went 2-1 last week, coming from behind in the seventh inning to defeat Lincoln High at home March 29 before earning a road win April 1 against Wayne. The Cardinals’ last game of the week was a 10-0, five-inning loss at Malcolm April 2.

“We need to continue to build ourselves a dependable pitching staff as the season progresses, and the top of the seventh was just some growing pains for us,” said CM head coach Jacob Cathey. “We need those moments of adversity to become tougher, both mentally and physically. I felt, regardless of the rough prior half inning, that we were still going to find a way to win.”

The Cardinals soon proved their coach right. After CM’s first batter struck out to start off the bottom of the seventh, Braden Schmeckpepper tripled to left field and later scored on a Tadd TeBrink single to short, tying the game 8-8. After TeBrink stole second, Micah Hartwig and Mason Crumbliss were both intentionally walked by Lincoln High to load the bases, which apparently was hoping for an easy force out at home and/or a double play to win the game.

The Cardinals’ next batter, Colton Homolka, had other ideas, singling on the first pitch he saw and driving home TeBrink with the winning run and competing the late-inning comeback 9-8.

Crumbliss picked up the win for the Cardinals after coming on with two outs in the seventh and getting a Links batter to line out to left, finally ending Lincoln High’s huge inning.

Following their 2½ hour bus ride to Wayne on Friday, said Cathey, “we played our best game thus far this season.”

“We didn’t do anything exceptional,” he said, “but we did a solid job in all facets of the game, and when we do that we become very hard to beat.”

After Wayne took a 1-0 lead on an unearned run in the first inning, neither team scored again until the Cardinals scored two runs in the top of the fourth to take a 2-1 lead. Conner Lomax was hit by a pitch to lead off the inning, then scored on a triple to center by Homolka. Homolka then was able to score on an RBI groundout hit by Maximus Connell.

Crete tacked on two more in the top of the fifth to take a 4-1 lead. TeBrink reached first on an error and later advanced to third on a Hartwig groundout. After Crumbliss drew a walk, TeBrink scored on an error by the Blue Devil second baseman, which also advanced Carson Kotil, running for Crumbliss, to second. Kotil later scored on a Lomax single to right field, making the score 4-1.

Wayne scored one run in the bottom of the sixth to cut the lead to 4-2, but the Cardinals held on the rest of the way to earn the road victory.

“We had a few really big defensive plays that made for a very intense and fun game,” Cathey said. “That was the type of game you can look back on and say ‘Look, we can play a complete game.’”

The Cardinals again had to hit the road Saturday to take on Malcolm.

Clipper senior pitcher Conner Zegar proved to be too much for the Cardinals that day, however, striking out six CM batters in five innings, with no walks only allowing one hit, a double by TeBrink in the fourth inning. Still, Malcolm was only leading by two going into the bottom of the fifth inning before the Clippers exploded for eight runs to end the game by run rule, 10-0.

“We arrived home late Friday night and had a quick turnaround Saturday morning,” Cathey said, “but I felt we competed pretty well. Their pitcher was in the zone often and while we did put the ball in play hard, their defense played really well, so we have to give them credit for that.

“Ethan Wittstruck did a great job of keeping us in the game, but again, in attempting to build our pitching we had a rough inning and things snow-balled on us. Our ultimate goal is to be playing our best baseball come May. We are continuing to improve each week and I think come May we will be a tough team to beat.”