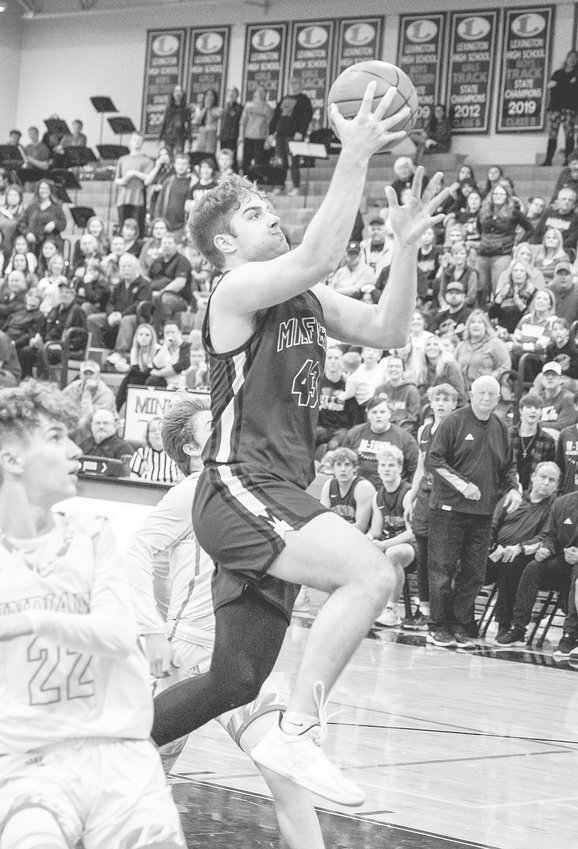 Milford's Seth Stutzman flies toward the rim against Ogallala in the district final Feb. 26.
Brandon Mowinkel

After advancing to the state tournament last season, the Milford boys’ basketball team was looking for a return trip in 2022.

That was not in the cards, however, as Ogallala ended Milford’s season Feb. 26, downing the Eagles 70-60 in the district championship.

“It was an exciting week and an abrupt end,” Coach Tony Muller said.

The Eagles hosted their subdistrict tournament Feb. 21-24. MHS played Raymond Central in the quarterfinals Feb. 22 and beat the Mustangs 62-46.

The win was costly, however, as senior Jaxon Weyand hurt his knee in the first quarter.

“I was pleased with how we stepped up,” Muller said.

Muller said the Eagles were able to take control in the second half and hold Raymond Central at bay.

The win put MHS in the subdistrict final against Malcolm, a rematch from earlier this season, and the Eagles defeated the Clippers 72-56.

“We were very consistent,” Muller said.

Muller said Reice Stutzman, Nelson Girmus and Chase Nitzsche, all coming off the bench, did good things for the Eagles.

Milford led 38-25 at halftime, and Malcolm cut the lead to less than 10 before the Eagles pulled away again.

“This was one of our better games of the year,” Muller said. “I thought we played good basketball and were very efficient – not many wasted trips.”

With the subdistrict tournament victory, Milford advanced to a district final against Ogallala. Muller said Saturday was the day scheduled for the finals, but teams could switch to Monday or Tuesday if both agreed.

The two couldn’t reach an agreement so played Feb. 26. Ogallala got the better of Milford 70-60 to end Milford’s season.

Milford led 13-12 after the first quarter, but the Indians outscored the Eagles 23-9 in the second quarter and Milford couldn’t fully recover from that.

Weyand tried to go off the bench but reinjured his knee.

“Ogallala is a good team. You want to have everyone,” Muller said.

Muller said Ogallala made five three-pointers in the first half, including one at the buzzer to give OHS a 13-point halftime lead.

Milford came out strong to start the third quarter and cut the lead to six, but OHS is a good scoring team, Muller said.

“It was a very disappointing loss,” he said. “I’m proud of the guys for battling back.”

Stutzman and Weyand both finished with over 1,000 career points. Stutzman scored 1,347 and is second on the career scoring list. Weyand scored 1,213 and is fourth on the career chart.