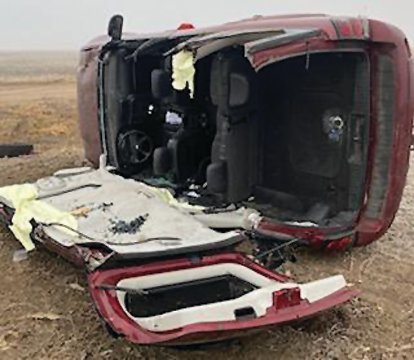 A Milford resident is still in a hospital after a car wreck seriously injured him on New Year’s Eve.

Ken Burkhardt was on his way to work on the morning of Dec. 31 when he hit a patch of black ice that caused him to go off the road.

Burkhardt’s daughter Keelee Saunders said that someone had just driven by him when he crashed the car.

“When he hit the ice, the car jumped into the ditch and rolled over,” she said. “A witness was there and when she saw him crash she went right over to him and called 911. We are very thankful for them.”

When the emergency responders got to Burkhardt, they had to use the Jaws of Life to get him out of the car.

Saunders said that the paramedics transported Burkhardt to a nearby hospital.

“After the paramedics got to him, they immediately transported him to Bryan West in Lincoln,” she said. “He was taken to the intensive care unit.”

Burkhardt is currently in the ICU as he has multiple fractures in his upper and lower neck that have caused damage to his spinal cord and impaired his extremities. He was put on a ventilator to start, but has been slowly taken off.

So far, Burkhardt has had one longer surgery to help correct the damage.

“The surgery started a few hours before on New Year’s Eve and went into New Year’s day,” Saunders said.

Saunders also mentioned that very few people are able to be in Burkhardt’s room at a time.

“Only two people are able to be in his room,” she said. “That’s been tough on us because we’re trying to let all of our family in to see him.”

Saunders has started a GoFundMe page where people can donate to help the family pay for medical bills and any travel expenses.

“We’re also getting a P.O. box set up that people can send money to for bills,” Saunders said.

Saunders also said that although Burkhardt hasn’t made a lot of progress yet, they’re hopeful things will start to get better soon.

“All we can do is wait and see what happens,” she said. “Minute by minute, we just have to wait.”

Anyone interested in donating to the GoFundMe page can go to https://gofund.me/f8178d76.