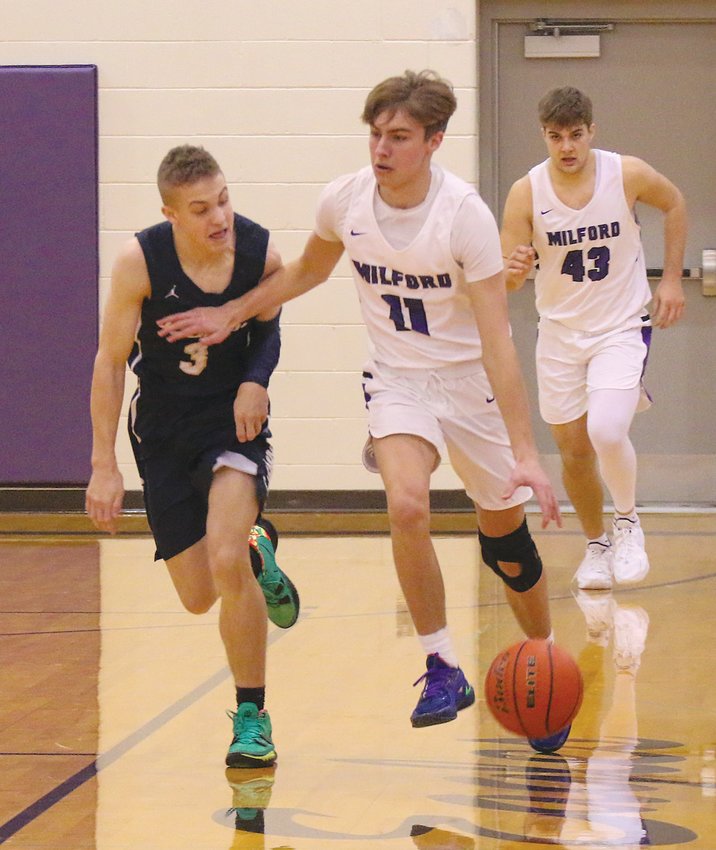 Milford's Micah Hartwig tries to keep Logan DeBoer of Lincoln Lutheran away from the ball as they come down the court Dec. 11. MHS's Seth Stutzman trails the play.
Stephanie Croston
Posted Thursday, December 16, 2021 11:00 am
by Stephanie Croston, scroston@sewardindependent.com

Coach Tony Muller said Milford built an early lead against Fairbury, but the Jeffs were able to battle back and tie the score at the end of the first quarter.

FHS played a zone defense and packed the lane, making it difficult for Milford’s guards to slash to the hoop.

Muller said the team couldn’t convert inside and committed too many turnovers in transition.

Fairbury cut the MHS lead to one in the fourth quarter, but the Eagles made free throws at the end of the game to seal the win.

“It was good to get the win,” Muller said. “Even though we didn’t play well, we kept our composure. The last three minutes were probably the best we played.”

The team was back on the court less than 24 hours later to play a tough Lincoln Lutheran squad. Muller said the Eagles played much better and took better care of the ball.

The Warriors got hot from three-point range in the third quarter, and that kept them in the game, Muller said.

He was pleased to see Milford’s intensity higher and better quality of play.

Senior Micah Hartwig was back on the court this week after missing the first few games with a leg injury. He scored four against Lincoln Lutheran.