“You get to dream big” 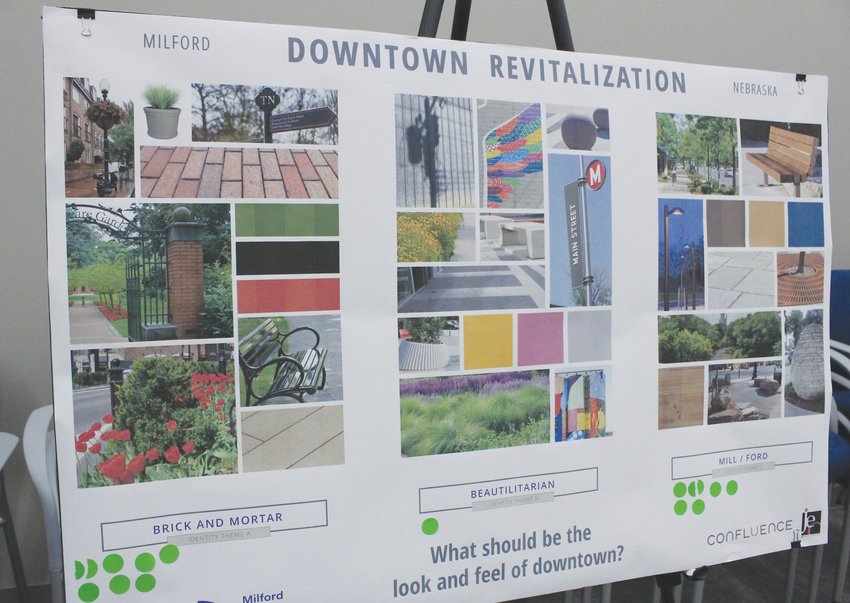 One of the opportunities for Milford residents to offer input was on an identity board that showed various options to how future sidewalks, landscaping and building improvements might look as a result of a Milford Downtown Revitalization project. The green dots represent
Craig Jones/MT
Posted Wednesday, December 15, 2021 12:00 am
by Craig Jones, craig@sewardindependent.com

What should be the future look and feel of downtown Milford?

Community members' input on that question will be factored in as a Milford Downtown Revitalization plan for the city is underway. As part of an open house Dec. 9 at City Hall, an Omaha-based firm composed of landscape architects, urban designers and planners with roots across the Midwest, was on site to allow people to be a part of the process.

The plan will involve such functions as sidewalks, landscaping, building improvements, parking and lighting and signage, according to Caitlin Bolte, a landscape architect with Confluence. She said the eventual plan will be focused along First Street from C Street to South Maple Avenue.

“Downtown is the heart of this or any community,” Bolte said. “We're just getting started and we're here tonight to ask questions and listen to what the public has to say.

As part of the process, participants were given a form to fill out with their thoughts on questions such as:

• If you left Milford for 10 years and then returned, what portion of downtown would you hope remain unchanged?

• What portions would you have hoped have been improved?

• What/where do you consider to be the “front door” to downtown Milford?

Milford Mayor Patrick Kelley said it was symbolic that the project's kick-off was in the new City Hall, as it represents what he feels are a number of positive developments happening not just in downtown, but all across the city.

“(City Hall) puts a positive face to our community,” he said.

The building opened for business in February 2020, about the same time as problems with COVID-19 began to emerge. Kelley said that, along with some ongoing tweaks to the building's infrastructure, caused the delay in having an open house.

But since that time, other projects have recently been completed or are works in progress, such as a $5 million water main capital improvement project, a major housing subdivision in the south part of town, an $80,000 swimming pool renovation project, a park renovation project that will include a splash pond along with a scheduled plan in 2022 to improve Highway 6 all through the city.

Regarding the Downtown Revitalization project, Kelley said he believes it will be another factor leading people to want to visit Milford and perhaps make it their new hometown.

“I hope we can find ways to improve the downtown district while still maintaining our heritage,” he said, referring to the brick streets of downtown as an example.

Bolte said the next step in the process for Confluence is to tabulate the information received from the kick-off event, working toward an initial concept review in April 2022. In June, the final draft concept of what the plan needs to achieve should be accomplished.

The final critical milestone will be in mid-September 2022, when the Milford City Council would apply for the second round of funds for a Community Development Block Grant to assist in funding the implementation portion of the project, Bolte said.

Milford residents that weren't at the kick-off event can also participate in the process by going online to https://confluence.mysocialpinpoint.com/milford and answering the questions.