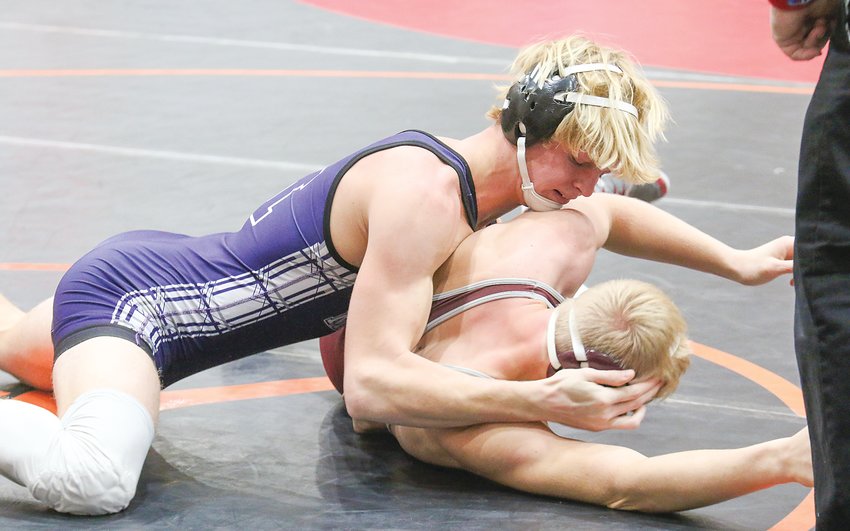 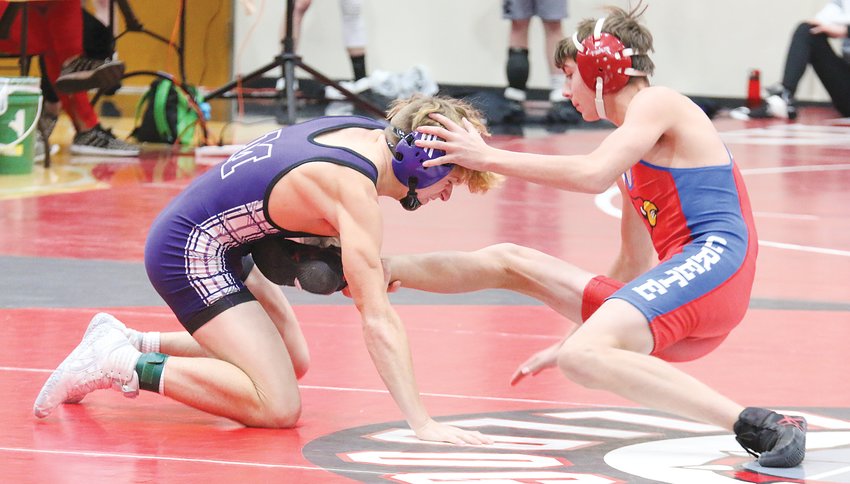 Eli Vondra of Milford takes down Jayden Boyle of Crete with an ankle pick during the Bob Arehart Invitational in Friend Dec. 4.
Stephanie Croston
Previous Next
Posted Thursday, December 9, 2021 10:00 am
by Stephanie Croston, scroston@sewardindependent.com

The 2021-22 season got off to a good start for the Milford wrestling team. Milford swept a triangular Dec. 2 and won the Bob Arehart Invitational in Friend Dec. 4 for the third consecutive year.

“We knew we were favored to win the duals,” Coach Joe Schluckebier said.

The Eagles don’t have a lot of duals on their schedule this season. With the goal of the state dual tournament in February, Schluckebier said, MHS needs to win them.

“We can’t have a blunder or we won’t make the state duals,” he said.

Schluckebier said it’s been an interesting six years at the helm of Milford wrestling, going from four wrestlers to being the clear favorite to win tournaments and duals.

“It’s fun but different. You have to take a different approach,” he said.

He said teams assume even the MHS freshmen are good.

“We get everyone’s best shot,” he said.

Schluckebier said the tournament went about as well as it could have. While Oborny and Vondra were favored, their losses are a stepping stone for the two, the coach said.

“They were toss-ups anyway and can be constructive,” he said. “We want to see tough competition.”

Overall, he said, the week was a good start to the season.

The Eagles will host Seward and Centennial for the county triangular Thursday, Dec. 9, with matches starting at 5 p.m. On Saturday, Dec. 11, the Eagles will wrestle at Crete in a tournament featuring Classes A and B schools.

“We are excited for it,” Schluckebier said. “It’s a big deal to win it. It presents a lot of challenges for us.”